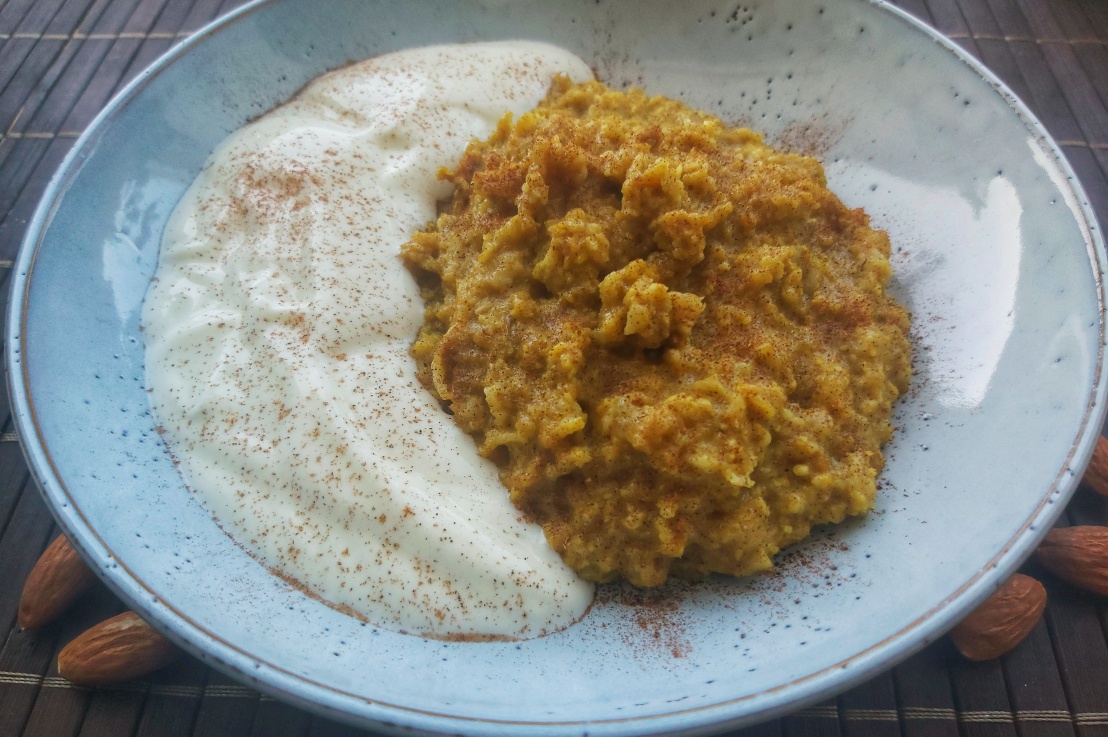 After a while without porridge recipes, I’m about to bless you with a second one this month (and it may not be the last!). Porridge – also known as oatmeal – is one of my favourite breakfast foods. Not only healthy and nutritious, but also so, so delicious! It’s a perfect base that can carry almost any flavour. Carrot cake, banana, coconut… the possibilities are endless. I’ve even seen recipes for savoury porridge, though I’m yet to try those out. Today, I want to share a recipe for turmeric pear porridge.

Rolled oats are one of the healthiest grains on earth and a natural superfood. They’re packed with fibre, phosphorus, thiamine, magnesium and zinc. They’re gluten free by nature, though if you’re coeliac – make sure the oats you use are certified gluten free, as they may have been contaminated in the factory otherwise. Oats are also considered one of the most satiating foods, which helps those trying to lose weight stay full for longer. Studies show that oats also help lower blood sugar levels and prevent heart disease. As with most foods, the less processed oats, the better – choose rolled oats over instant oat flakes.

Pears are high in vitamin C, vitamin K, copper, potassium and antioxidants. They’re a source of soluble and insoluble fibre. Soluble fibres feed the good bacteria in your gut and are considered a prebiotic. Most of the fibre in pears comes from the skin, so don’t peel the goodness off the fruit!

Cinnamon is believed to have many medicinal benefits, and is used frequently in Chinese herbal medicine. It displays anti-viral, anti-bacterial and anti-fungal properties. It also contains large amounts of antioxidants, which help protect the body from disease and have been found to have anti-inflammatory effects. Cinnamon’s prebiotic properties may improve gut health. Finally, cinnamon can reduce blood pressure, lower the risk of type 2 diabetes and improve digestion.

Turmeric food supplements have recently massively grew in popularity, and for a good reason – turmeric may be the most effective nutritional supplement in existence. It has been used in India for thousands of years as both a spice and medicinal herb, but also for fabric dyeing and cosmetics. It has powerful anti-inflammatory effects and is a very strong antioxidant. It can also lower the risk of a heart disease and prevent some types of cancer. And last – but by no means least – turmeric also adds a lovely hint of bright yellow to any meal!

Ginger, like many other popular Asian spices, has a very long history of use in various forms of traditional and alternative medicine. It is known to have powerful anti-inflammatory and antioxidant effects. Ginger appears to be highly effective against nausea, may help with weight loss and indigestion. It’s also believed to lower blood sugar levels and prevent heart disease.

Normally, I would cook my porridge in milk instead of water, and I highly recommend that option! Milky porridge is creamier and generally nicer (in my opinion) than water based one. The reason why I went for water based porridge with Greek yoghurt on the side was that I had an open pot of yoghurt in the fridge that had to be eaten. If you choose to go with milk, use dairy or unsweetened plant based milk.

Greek yoghurt is a fantastic source of protein, with 100g of yoghurt containing 10g of protein. It’s also a source of calcium, essential for good bone health, and also contains probiotics, which support a healthy bacterial balance in the gut. Choose a low fat version of Greek yoghurt though, as dairy fat is on the unhealthy side (opt for healthier sources of fat in your meals, like those found in nuts and seeds).

Almonds are commonly considered a nut, but in reality they are edible seeds of the almond tree. They’re high in fat – mainly monounsaturated fat, a goodie that protects the heart by maintaining good levels of cholesterol. Almonds are a great source of fibre and protein, and also contain vitamin E, selenium, zinc, calcium, magnesium and B vitamins, especially folate and biotin (vitamin B7). The taste of almonds in this recipe isn’t strong at all and you could skip them altogether. I made my porridge with water instead of milk, with a side of fat free Greek yoghurt, and needed to add a source of healthy fat to the meal to better balance the nutrients.

How to make a turmeric pear porridge:

Peel the pear and then grate it into a nonstick saucepan. Don’t throw the skin away! Snack on it whilst cooking your porridge 🙂 Most of the health benefits of pears come from the skin, it would be a waste to put it in the bin.

Add a cup of water or milk to the saucepan. Heat it up on medium heat.

Once the water with pear is boiling, add the oats and almonds and lower the heat. Add your spices (I like to be rather generous with the cinnamon, but use as much as you like) and let it simmer on low heat for around 10 minutes, stirring constantly. The texture of your porridge should become really thick and sticky.

Transfer into a bowl and enjoy! If you went for the water version, add a splash of fat free Greek yoghurt on the side.

Sprinkle with cinnamon for decoration. You can add a drizzle of honey if the porridge isn’t sweet enough for you. 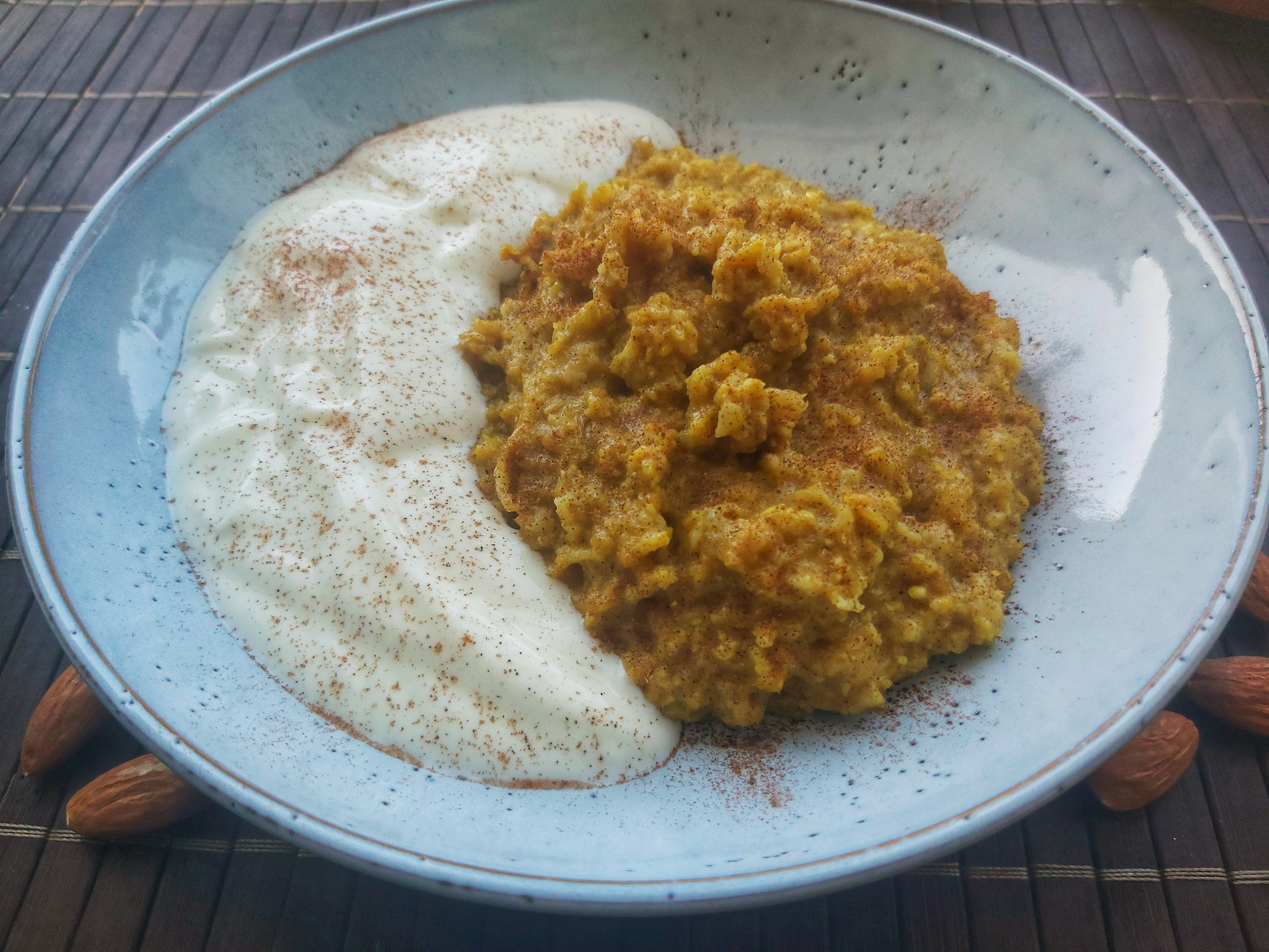 Inspired by parakeet feathers I've been finding in the local park 🦜 The population of parakeets in London, originally started by escape pets a few decades ago, is now huge!
Another quilling birthday card - a flower bouquet 😊🌷
Another quilled card 💐🌺🌷
Finished, at last! Only took a few weeks of on and off motivation. And to think I bought it as a one evening activity plan... Underestimated this little thing, big time. It's now proudly decorating my living room wall 😊
Last days of the holiday break - back in my hometown. Saturday hiking in the mountains, grilling sausages and a visit to one of my favourite cafes. Then a Sunday trip to "Polish Maldives" in Jaworzno.
Recharging batteries in Makarska, Croatia 🌴