Ho, ho, ho, ho! Santa Claus is coming to town! Or… is he? Apparently, not everywhere.

I suppose all countries have their own versions of popular holidays, making them unique and different from other places. In terms of Christmas, Poland has a lot of traditions, most of which you most likely won’t find anywhere else. Here’s a list of fun facts for you! A quick little read for this busy weekend, presumably full of hectic preparations.

1. Santa Claus comes on the 6th of December. He only brings little gifts, typically sweets for children. (That’s right, there are two occasions to exchange gifts in December!)

2. If you’ve been naughty, Santa will bring you coal instead. Or potato peels.

4. We exchange Christmas presents on December 24th after the festive supper and they’re said to be brought by Baby Jesus. (At least in my region. In other parts of Poland Christmas gifts can be brought by someone – or something – else, like an Angel, a Star or Father Frost – it’s never Santa though, cause he comes on the 6th of December – see point #1. 😉 )

5. On Christmas Eve, we celebrate with a festive supper. There have to be at least 12 dishes on the table, and you’re supposed to try a bit of everything.

6. So what’s on the table on Christmas Eve? The most common foods include fish (namely carp), beetroot soup (borscht – or “barszcz” in Polish) with dumplings filled with cabbage and mushrooms, cabbage and mushrooms as a side, and for dessert you’re very likely to have “makówki“ – a sweet poppy seed & nuts & raisins dish. 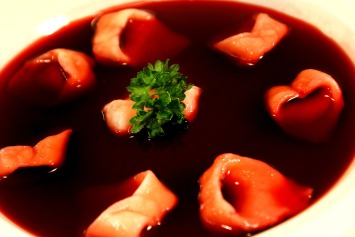 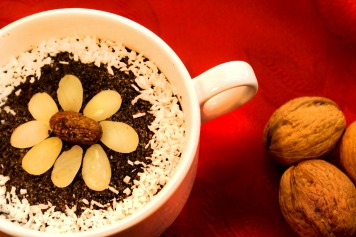 7. Although the Christmas Eve supper is a real feast, there’s usually no meat included. Poland has strong bonds with Christian traditions (Catholic, to be specific), and in Catholicism, Christmas Eve is a day of fasting, when meat is not allowed. Fish doesn’t count as meat in terms of Catholic fasting though, that’s why they’re the most common part of Christmas Eve supper.

8. Before we start the Christmas Eve feast, we exchange wishes for the following year with everyone present at the table. We do it in a very special way. Everyone holds an “opłatek“ in their hand – a very thin, white wafer, typically made out of flour and water. After exchanging wishes with someone, you break off a little piece of their “opłatek” and eat it, and they take a bit of yours.

9. Our Christmas Eve table always has an extra empty spot – a place to sit and a set of crockery and cutlery. It’s said that the spot is prepared for a lost wanderer, a stranger who might need shelter and food. It’s to commemorate the fact that there was no place for Mother Mary and Saint Joseph in any of the inns, and Baby Jesus was placed in a manger after he was born.

10. Speaking of which – the fact that Baby Jesus was born in, presumably, a stable of some kind, is commemorated by putting a little bit of hay under the tablecloth for the duration of our Christmas Eve supper.

11. Christmas Eve supper, traditionally, is supposed to start when the first star can be seen on the sky after dusk (it’s the middle of winter, so the sun sets around 4pm). It’s usually children’s job to observe the sky and try to spot that first star.

12. Although our most prominent Christmas traditions take place on the 24th of December, that day is actually – in theory – a working day, and most people have to use one of their holidays to have it off work – as long as their job allows that and provided that they want to, of course (which most people certainly do). Official bank holidays fall on the 25th and 26th of December, which are usually spent among your relatives, but there are no distinct traditions on those days – just plenty of festive food.

13. Traditionally, we’d put up the Christmas tree on the 24th of December. In reality it’s usually a few days before that date (there’s enough work to be done on Christmas Eve day), but nowhere near as early as some other countries do (end of November even?!). This doesn’t apply to shopping malls and town centres – these start the commercial holiday around the middle of November, as you’d expect.

14. Because we put up our Christmas trees a bit later than some other countries, we also keep them for longer – until the 2nd of February (that’s when Christmas season officially ends in Catholic Church).

15. Those who attend religious services at the church may choose to attend a midnight mass after the Christmas Eve supper. It’s very festive, full of caroling, and despite the late hour those midnight masses are usually crowdly attended.

16. The last fun fact is a fairly new, modern tradition, but a fairly strong one too. On Christmas Eve, in the evening, there’s always Home Alone on one of our biggest TV channels. Always. They tried to break the tradition a few years ago and announced they wouldn’t be broadcasting Home Alone on Christmas Eve that year… thousands of people signed an online petition against that idea as a result and the TV channel had to change their mind. They haven’t tried to change it since that time. This year too there will be Home Alone on TV at 8pm on Christmas Eve. And to be honest, I don’t care that I know the whole film by heart, after watching it at least 20 times – I’m going to watch it again and I’m going to laugh just like I did back when I watched it for the first time.

How surprising did you find this list? Is there anything you found particularly queer? Or maybe some of these traditions are similar in your countries (I know that celebrating Christmas Eve is a thing in some other places too)?

How To Have A Healthy Christmas

36 thoughts on “16 Facts About Christmas Traditions In Poland”